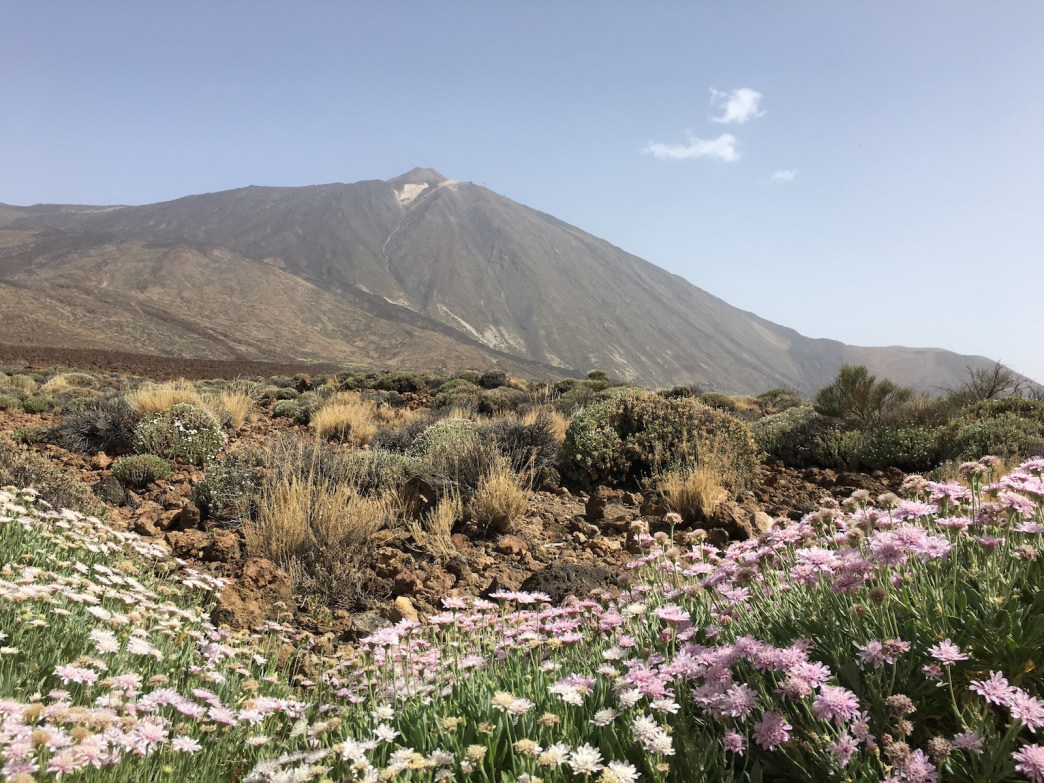 Spring is a wonderful time to catch flowers in bloom on Mount Teide, Spain’s tallest peak, which rises to 12,198 feet on the island of Tenerife.

Summit fever has swept through the bunks of Altavista Refuge, a modest stone hut perched at 10,700 feet on the volcanic flanks of Mount Teide. Rustling bodies wake me at 4:30 am after a fitful night’s sleep disrupted by squeaky beds, thin air, and anticipation of an alpine start. Adventure trumps beauty sleep. I toss aside the blanket, lace my shoes, grab my pack, and we’re off, hiking the steep trail of sharp black lava rocks that climbs 1,500 feet from the hut to the top of Mount Teide, Spain’s highest peak. The sky is dark as ink, yet lit by a gazillion twinkling stars.

At 12,198 feet, Mount Teide juts up from the Atlantic Ocean on Tenerife in the Canary Islands. Claimed by Spain since 1821, the Canaries are a cluster of seven volcanic islands off the northwest coast of Africa. Tenerife is the largest and tallest, a rugged landscape rimmed by 250 miles of coastline and 70 beaches. It’s a magnet for sun worshippers, a concept that seems foreign from where I stand high on a mountain in the dark with cold wind whipping my face.

The beam of my headlamp leads me to the summit, where I huddle among rocks and wait for the sun to rise. I warm my hands in the steam of fumaroles—volcanic vents that seep hot sulfurous gas, a reminder that Teide is still an active volcano. As dawn’s glow slowly lights up the sky with brushes of blue and pink, the island fans out below, displaying deep gorges and dreamy beaches, desert dunes and cloud forest, vineyards and goat ranches.

I came to Tenerife for Mount Teide, but I went home having discovered so much more on this island, whose 785 square miles—nearly half in protected nature areas—is brimming with unique landscapes and the adventures that go with them. Here are eight ways to explore.

Teide's volcanic tip rises straight from sea level to 12,198 feet in the middle of Tenerife. Trails traverse the lunar-like lava fields of Teide National Park, which cradles the mountain and is a UNESCO World Heritage Site. For first dibs on the summit and the chance to bask on the peak in dawn's light, hike to Altavista Refuge to spend the night. Day trippers who want to save the sweat can take a cable car to 650 feet below the peak but need a permit to hike to the top.

2. Kayak in the Shadow of Los Gigantes

The eastern edge of Tenerife plummets to the sea in Teno Rural Park, where "Acantilados de los Gigantes" (cliffs of the giants) tower some 2,000 feet, their sheer rock faces notched with ledges and alcoves where birds nest. The best way to take it all in is from the seat of a kayak, with stops for snorkeling in the crystalline waters. Outfitter Teno Activo is a solid choice for an operator to lead the way.

You don’t have to dig deep to get a sense for Tenerife’s volcanic roots—Earth’s fire has left behind lava at nearly every turn on the island. But venture below the upper crust and you’ll start to understand the intricacies of how molten rock flows. The perfect way to do just that is by wandering through the underworld at La Cueva del Viento, a cave that formed 27,000 years ago and is part of a 10.5-mile system of lava tubes. Don’t forget the flashlight and headlamps, especially if you’re afraid of the dark.

4. Get Misty in the Anaga Mountains

At Tenerife’s northeastern tip, Anaga Rural Park protects the Anaga Mountains, a UNESCO Biosphere Reserve. Drive along the spine of the mountains on TF-12 to see "horizontal rain," a weather phenomenon that occurs when prevailing wind hits steep slopes and creates dripping mist. Laurel trees suck this moisture from the air, growing into a blanket of lush cloud forest, while a completely different landscape—complete with cacti—cloaks dry hillsides. Explore it all via trails traversing scenic ridges and descending to rocky shores. Stop at the visitor center in Cruz del Carmen to discover the best hiking spots, or hook up with Anaga Experience for a guided trek.

A visit to Bodegas Monje is the perfect way to while away an afternoon while soaking up some of the Canary Islands’ culinary and wine culture. On the property’s 42 acres of steep hillside overlooking the sea, the fifth generation of the Monje family grows seven varieties of grapes, including six unique to the Canary Islands. Take a winery tour followed by a leisurely lunch on the outdoor patio. Or sign up for a mojo workshop to learn how to make wrinkly potatoes and mojo sauce—signatures of Canarian cuisine.

6. Lose Yourself in La Laguna

As if Tenerife didn’t have enough reasons to brag, it also charms with La Laguna, a colorful colonial town established in the 15th century that is recognized as a UNESCO World Heritage Site. Wander the narrow streets of the old quarter, explore the historic churches and other religious buildings, and stop for tapas at a street-side café.

Twenty-one species of whales and dolphins frolic in the waters around Tenerife, making it one of the world’s top spots for cetacean viewing. Year-round residents include bottlenose dolphins and pilot whales, while sperm whales, orcas, and sei whales are some of the bigger beasts you might see. Whale watching tours depart from southern harbors on excursions that last from two to five hours.

Faced with tending goat herds in rugged terrain, Canarian shepherds adopted a unique form of travel: pole vaulting up and down steep hillsides and across ravines. "Salto del Pastor," or shepherd jumping, is no longer a common practice, but some energetic locals carry on the tradition for fun or sport. To see it in action, check out El Cardón’s Secrets of Punta de Teno tour, which includes a demonstration.

Written by Avery Stonich for RootsRated.